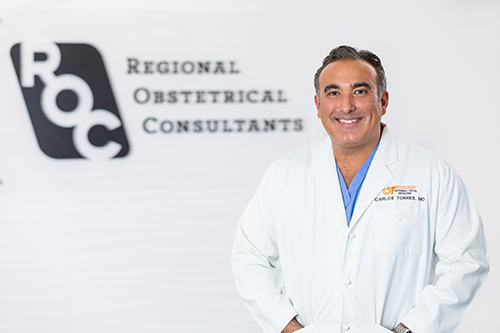 Dr. Torres is a double boarded OB/GYN Maternal-Fetal (MFM) specialist, and he’s been a part of the team at Regional Obstetrical Consultants since 2006. Dr. Torres completed his medical studies at the University of Tennessee in Memphis, College of Medicine in 1999. He completed residency in Obstetrics and Gynecology (UT COM Chattanooga) in 2003, and received MFM training at Emory University, completing his fellowship in 2006. At present, in addition to his clinical duties, Dr. Torres functions as the CEO of Regional Obstetrical Consultants.

Teaching is one of Dr. Torres’ passions, and he has been on the faculty of the UT College of Medicine in the capacity of Associate Professor since 2008, receiving many accolades both locally and nationally. He was awarded Teacher of the Year multiple times locally, and nationally received the ISSHP Investigator Award, ACOG, and APGO Teacher of the Year. His particular academic interests include preterm labor, hypertensive disorders in pregnancy, and doppler ultrasonography.

Since 2008, Dr. Torres has been instrumental in implementing one of the largest MFM telehealth networks in the region, thus making available to patients living in rural communities the same level of care they would have access to in larger metropolitan areas. He is multilingual– speaking fluent English, Spanish, and Portuguese, and enjoys participating in the care of the Hispanic population in Tennessee and Georgia. His hobbies include traveling, boating, and cars of any kind.